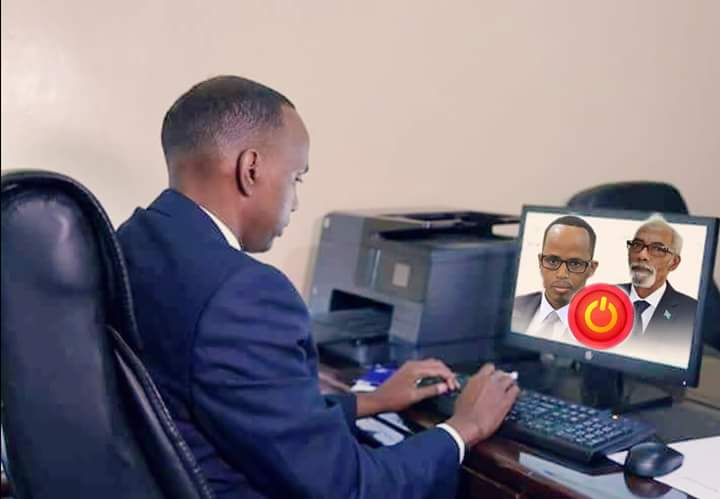 #farmaajo and his prime minister khayre for obstruction of justice, this case was linked with dp world, and Qatar

“Whether it is devotion to principle or hunger for political survival that puts the prospect of impeachment and removal on the table, the crucial thing is that the prospect now be taken seriously.”

Now the country is faced with a President and his prime minister whose conduct strongly suggests that they poses a danger to national treason of government and also a dangerous political system.

Even without getting to the bottom of what the PM khayre dismissed as “this is ties with UAE and dp world ” impeachable offenses could theoretically have been charged from the outset of this presidency. One important example is khayre”s brazen defiance of the foreign emoluments clause, which is designed to prevent foreign powers from pressuring somalia. officials to stray from undivided loyalty to the Somalia. Political reality made impeachment and removal on that and other grounds seem premature.

No longer. To wait for the results of the multiple investigations underway is to risk tying somalia nation’s fate to the whims of an authoritarian leader.

Jawaari summary resignation will not stop the inquiry, yet it represented an obvious effort to interfere with a probe involving somali government matters vastly more serious than the “khayre met dp world manager in dubai”

#Farmaajo and khayre accompanied that confession with self-serving — and manifestly false — assertions about having been assured by jawaari that khayre  himself was not under investigation. By farmaajo’s own account, he asked jawaari about thier investigative status (dp world) even as he was conducting the equivalent  in which jawaari sought to retain his position as parliament speaker.

Further reporting suggests that the encounter was even more sinister, with khayre insisting that jawaari pledge “loyalty” to him in order to retain his job. Khayre was met with dp world manager in Dubai, the president turned to the media with a none-too-subtle threat that jawaari would regret any decision to disseminate his version of his conversations with khayre — something that jawaari has every right, and indeed a civic duty, to do.

It will require serious commitment to constitutional principle, and courageous willingness to put devotion to the somali government interest above self-interest and party loyalty, for a parliament of the president’s own parliament members to initiate an impeachment inquiry. It would be a terrible shame if only the speaker of house ( jawari) resigned

Farmaajo and khayre they must go

Shakir Essa –The voice of the voiceless community